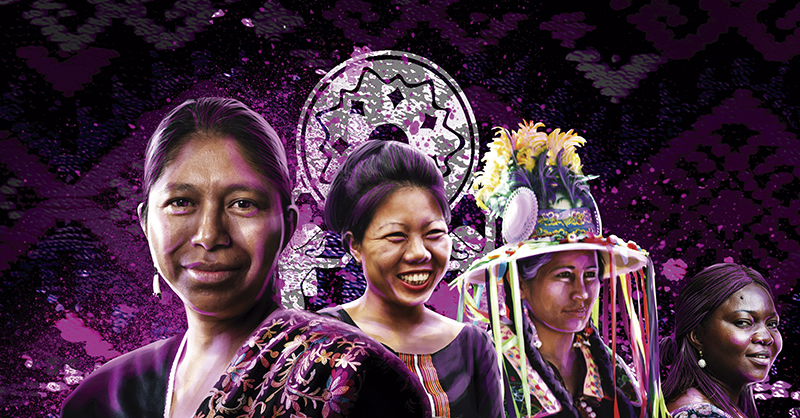 For the launch of the Global Study on the Situation of Indigenous Women and Girls in the mark of the 25th anniversary of the Beijing Declaration and Platform for Action, Teresa Zapeta, Maya K’iche woman from Guatemala, lit a candle.

“I light this candle in a spirit of respect for every person’s own spirituality. For us, it represents the dawn, the beginning of the day, and it is with this energy that we want to give thanks to the grandmothers who preceded us as well as to connect with the elements of the universe,” declared the Executive Director of the International Indigenous Women’s Forum (FIMI).

Ancestral knowledge and worldview are part of the struggle of Indigenous Women for their individual and collective rights. This was so even before 189 countries, including Mexico, unanimously adopted the Beijing Declaration and Platform for Action 25 years ago.

The United Nations (UN) has held four global conferences on women: Mexico City (1975), Copenhagen (1980), Nairobi (1985) and Beijing (1995). In the last one, strategic objectives for gender equality were established in 12 crucial areas, establishing the basis for the global study describing the situation of indigenous women and girls in five regions of the world.

Indigenous Women have contributed to the implementation of the Beijing Declaration and Platform for Action at the local, national and international levels with their voices and actions. According to Tarcila Rivera Zea, FIMI’s President, they are agents of change and not just victims of intersectional discrimination, vulnerability and marginalization.

“We see that many indigenous women who have contributed to the liberation of peoples and the construction of solutions are not represented in written history. That is why we always have to look behind us in order to better value the present and build the future,” said the indigenous Peruvian activist during her address.

The Beijing Conference influenced the movement of indigenous women, with hundreds of them participating for the first time. Since 1995, they have established themselves in various national and regional organizations and have created new alliances, giving rise to international networks such as FIMI.

On its 20th anniversary, the International Indigenous Women’s Forum, led by Teresa Zapeta and Tarcila Rivera, presents this global study that cuts across its four main programs: advocacy; training and capacity building; research and issues of impact on the lives of indigenous women; and the AYNI Fund, a Quechua word meaning reciprocity, equality and justice.

The Study in Regions With COVID-19

The Global Study on the Situation of Indigenous Women and Girls in the context of the 25th anniversary of the Beijing Declaration and Platform for Action will serve as an input for the Second Global Conference of Indigenous Women, to be held in 2021.

The document is divided into six sections and is made up of regional studies that were carried out by indigenous and non-indigenous women consultants. The research process, which consisted of literature reviews and series of interviews, lasted approximately four months.

The common methodology was shared with the regional consultants at the end of November 2019 and the first reports were presented in March 2020. In the Arctic region, the process started in January 2020 and the results were ready for an online presentation on September 28.

The main findings for each region included the number of indigenous women, whether they live in rural or urban areas, the type of work they do and their education level.

“Limited access to quality education that is culturally and linguistically relevant remains a key challenge across all regions,” according to the results.

Part of the research and the results coincide with the COVID-19 pandemic, an outbreak that has had an impact on indigenous women.

“The full exercise of our collective and individual rights appears like an even more distant dream. What we are witnessing is actually an intensification of the inequalities and multiple forms of violences that affect our peoples, territories, bodies and spirits,” mentions the study.

That is why, as agents of change, women must be involved in decision-making.

“The pandemic will not end anytime soon and its consequences will resonate long into the future. Governments should listen to the voices of indigenous peoples and women, to their ancestral knowledge and to their best practices for resilience as they develop holistic responses to address this emergency and its aftermath,” recommends FIMI.

You can read the original article published in Spanish here.