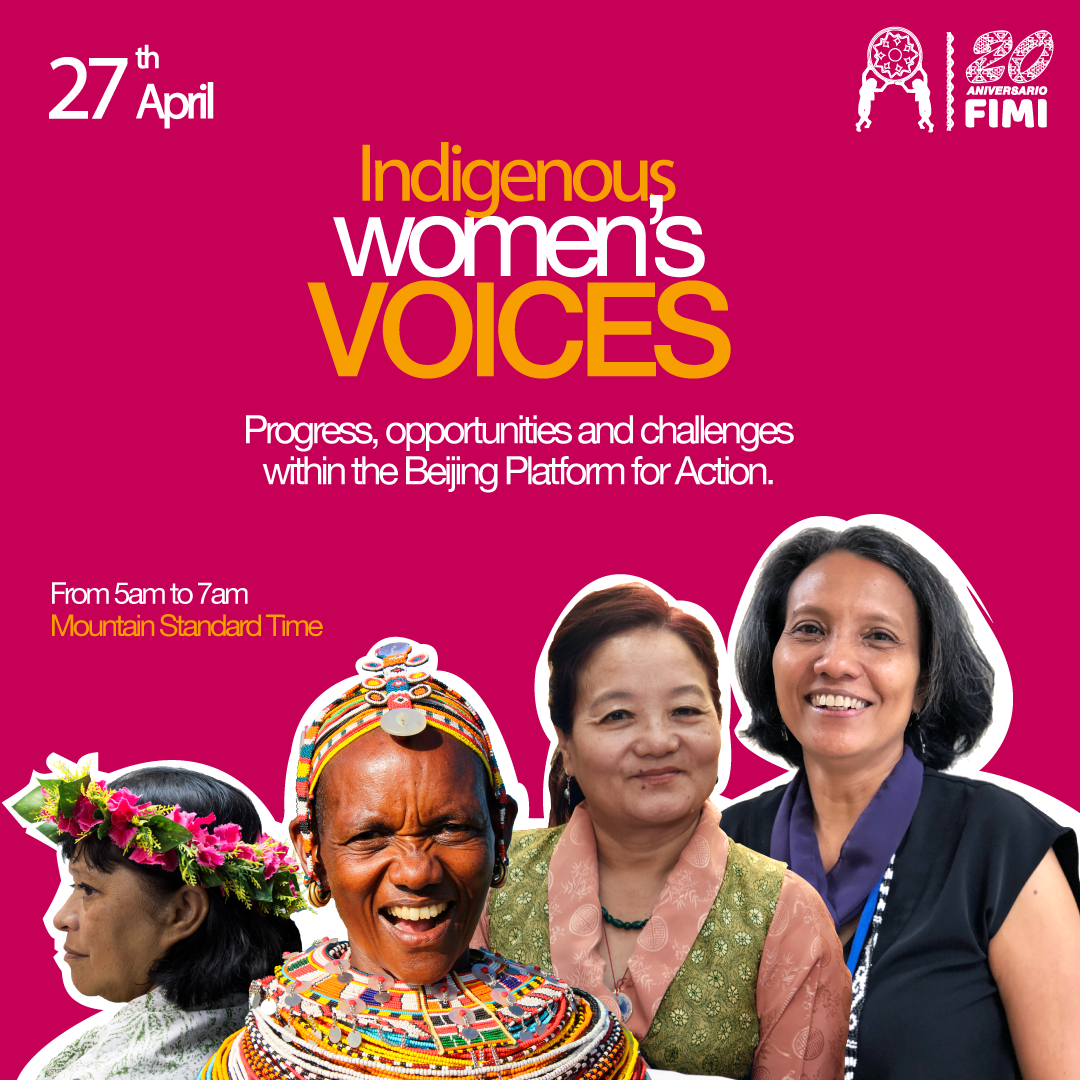 The voices of indigenous girls, youth and women must be heard, as much today as 25 years ago when the Beijing Declaration came to be. In addition to Beijing +25, 2020 marks five years since the launch of the Sustainable Development Goals (SDGs), including SDG 5 which calls for the achievement of gender equality and the empowerment of all women and girls everywhere by 2030. To achieve this goal, our voices must be included.

Within this political context, FIMI organized a webinar called “Voices of Indigenous Women: Achievements, Opportunities and Challenges”. Through the webinar, we analyzed the priorities, progress made, challenges and upcoming processes for the fulfilment of the rights of Indigenous Women within the framework of the Beijing Platform for Action.

This webinar was designed as an alternative for the activity planned in FIMI’s advocacy strategy for the sixty-fourth session of the Commission on the Legal and Social Status of Women (CSW64), which was cancelled due to the global sanitary crisis caused by COVID-19, in order to stay safe and protect life.

Through this collective dialogue, we invited the participants to raise their voices, deliberate and exchange innovative strategies to continue advancing the rights of Indigenous Women, in addition to addressing the social and economic challenges that are increasing the conditions of vulnerability and the inequality gaps caused by the new global context.

Over these more than two decades, some progress has been made regarding gender equality, women’s rights and the empowerment of indigenous women, youth and girls in Africa, Asia, Latin America and the Caribbean, North America, the Pacific and the Arctic. However, despite these achievements, we as Indigenous Women continue to face challenges including gender-based violence (especially in situations of conflict and political turmoil), limited access to financial and economic opportunities, and a greater vulnerability to the impacts of climate change and epidemics, among others.

Through this webinar presented in three languages (Spanish, English, and French), we spoke with a diverse group of panellists and 140 participants from the regions of Africa, Asia, Americas, the Pacific and the Arctic. Despite the distance and isolation that came with the pandemic, this solution helped build stronger ties of solidarity among the event’s participants.

By opening these new digital spaces, we can have a political impact on the international community while introducing new technological tools as a way to reduce the digital gaps our communities often suffer from. For this reason, Teresa Zapeta, FIMI’s Executive Director, invited the attendees to use this type of platform to monitor the achievements and challenges related to the violences faced by Indigenous Women, which are amplified by the pandemic.

Such will be the impact of COVID-19 that the Food and Agriculture Organization of the United Nations (FAO) expects famine and malnutrition to affect a growing number of people, from 14 to 80 million in the coming months, as stated by Patricia Cortés of UN Women. In such a context, it is important to highlight the role of Indigenous Women in the fight against food insecurity, a role that is clear to see in the community of Chamorro, according to Terilynne Francisco of the Women’s Association of Chamorro. In addition to providing food, Indigenous Women have historically been promoters of traditional medicines, as pointed out by Tai Pelli of the Taino people.

As Indigenous Women, we are agents of change and our best practices must be shared throughout the world. As an example, we can take the case of Namunkurá Associaçãieneno Xavante/NAX, an organization that shared information in Xavante language for the population and local health organizations, as a way to prevent the spread of the virus, as Samantha Ro’otsitsina de Carvalho Juruna shared during the activity.

Another example to highlight in the midst of this health crisis was shared by Viviane Michel, President of Quebec Native Women in Canada. She explained how her organization had developed a campaign to find and support Indigenous Women who are victims of domestic violence during the pandemic, condemning this situation through collective and individual actions including photographs and reports of the aggressions. These women receive from the organization the immediate support that the government cannot offer due to its heavy bureaucracy.

The pandemic has exacerbated the issues Indigenous Women grapple with, especially the twelve critical areas identified in the Beijing Declaration and Platform for Action. On this point, Mariam Wallet Aboubakrine, Coordinator of Tin Hinan, based in Canada, highlighted the importance of Indigenous Women’s leadership at the local, national, regional and global levels, which has contributed greatly to the improvements that we have collectively achieved as Indigenous Women in these areas.

Huguette RUSABIKA from the Pygmy Indigenous Community (BATWA) in the Democratic Republic of the Congo, added a practical outlook, explaining how her organization “Focus Droits Et Acces” has carried out initiatives to combat poverty, for example by teaching Indigenous Women manual trades such as cutting, tailoring, art and crafts, pottery. They have also distributed fertilizers, seeds and basic tools for agriculture.

Hindou Oumarou Ibrahim, a Mbororo Indigenous Woman from Chad and the coordinator of AFPAT, expressed her concern about the situations faced by Indigenous Women and Girls, which have not changed much in the last 25 years. She highlighted that governments must make good policies to ensure that Indigenous Girls can continue their education and subsequently join the work force, breaking with the traditional barriers that force them to leave school in order to marry early.

Reflecting on all of this, Beatrice Ducan of UN Women shares that, even though they occupy an active role in our societies, many Indigenous Women, especially those with some disability, are still subject to higher rates of school dropouts, unemployment, poverty and even untimely death. Uniting our voices, we can make a change in these indicators. To this end, we can use platforms such as the Permanent Forum for Indigenous Issues which, as indicated by Chandra Roy-Henriksen and Mirian Masaquiza, works to promote our individual and collective rights within governmental frameworks, presenting recommendations to member states to improve the situation of indigenous women.

We invite you to keep this conversation going by sharing best practices, strengthening ties between communities and joining your voice to this movement for our rights. We are waiting for you at our next events!