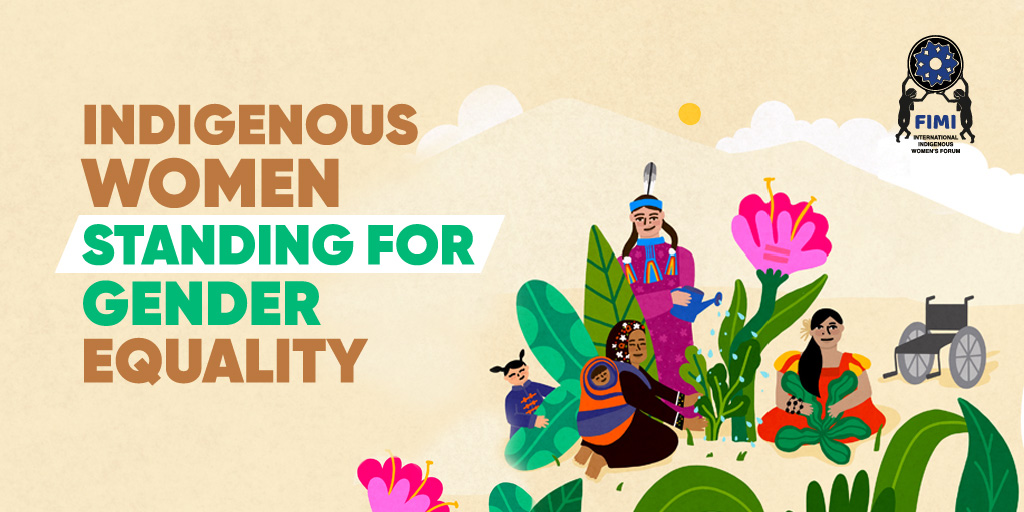 As Indigenous Women, we brought our voices to the Generation Equality Forum to analyze the progress made since the Fourth World Conference on Women in Beijing in 1995  and share strategies to achieve effective gender equality

The best way to decolonize the world is to re-indigenize those spaces in which we work for equality and fair conditions. We do not want to be above anyone else. We launched this event by singing, as a way to celebrate everything that we are. We thanked our ancestors, who made it possible for us to be here. We also started the event by recognizing the spiritual elements, calling upon the life-creating forces to lead fruitful conversations.

Indigenous Women have been preparing and working to have a political impact in the international stage for a long time. FIMI and the regional networks -the Continental Network of Indigenous Women of the Americas (ECMIA), the Alianza de Mujeres Indígenas de Centroamérica y México, the African Indigenous Women’s Organization, the Asian Indigenous Women’s Network and the National Aboriginal and Torres Strait Islander Women’s Alliance – have carried out preparatory work during two previous sessions, all in order to attend  the Generation Equality Forum with a clear message agreed by consensus from a diversity of voices.

We had also presented this common statement on February 10, 2021, in a high-level dialogue between Indigenous Women and key actors in collaboration with Mexican ambassador Ms. Yanerit Morgan. “The Forum is a key event to highlight the challenges faced by Indigenous Women and their contributions, from the local level to the global scene,” pointed out Sandra Creamer, leader of the Wannyi/Kalkadoon people from Australia and member of FIMI’s Board of Directors.

The road travelled since Beijing

Since then, “as Indigenous Women we have empowered ourselves, learning to negotiate, to lead advocacy work in international organizations, to prepare documents, to carry out studies and research  and began  telling our own story”, Ehrman added.

However, Indigenous Women around the world continue to face structural inequalities that prevent us from fully exercising our rights. Emily Lerosion, Indigenous Leader of the Samburu people of Kenya and director and founder of The New Dawn Pacesetter organization, has outlined some of the key issues.

To start with, there’s the right to education. “This is where all our problems begin.” Whenever large-scale projects come to our communities, for example, “due to a lack of education, as Indigenous Women we do not have the knowledge to oppose them”, explained Lerosion.

The right to speak and express ourselves on issues that directly impact us is also fundamental. Adriana Uex, a young Mayan leader and member of the National Coordination of Indigenous Women of Mexico (CONAMI), has issued a call for people to stop speaking on our behalf and for youth and Indigenous leaders to be given a voice. Talking for the youth, she has expressed a will to “be present as rights holders, free from any paternalistic grasp”.

Uex has also advocated for an “effective participation” as opposed to “palliative inclusion”. “The diversity of voices must be present whenever a decision about something involving us is taken. In a perfect world, we would not have to be demanding all this, we would already be recognized as political and legal holders” she added.

As an example, Emily Lerosion spoke of the difficulties that arise from the absence of our voices to condemn issues like those of traditional practices that violate the rights of Indigenous Women and girls. “As women, we do not have the right to give our opinion or to say no, and this condemns us to a role of victim.”

Indigenous Women as agents of change

To shed this label of victim that is imposed on us as Indigenous Women, we strive to position ourselves as agents of change. “Of course, we suffer from inequalities,” said Teresa Zapeta, Executive Director of FIMI, “but this label prevents us from seeing that we are capable of building something new, and that we actually are doing so.” Across the world, Indigenous Women have organized to meet their challenges. “We created our own organizations at the community, regional and national levels. This allows us to work as a group and to share experiences and strategies,” said Emily Lerosion.

This organizational capacity, which has been reinforced during the pandemic, has been one of the most valuable contributions of Indigenous Women. For example, Dialys Ehrman has explained how women have played a fundamental role in implementing the COVID-19 protocol in the Indigenous region of Kuna Yala, in Panama.

Another of the great contributions of Indigenous Women in this process towards equality has been to understand the issue “not only as a power struggle between genders, but as encompassing all the different diversities”, explained Teresa Zapeta. Intersectionality as well as the concept of environmental justice “are contributions of Indigenous Women and are now key themes at the Forum”.

But for words to become transformative actions, we must continue fighting for our rights as Indigenous Women, raising our voices in all their diversity.